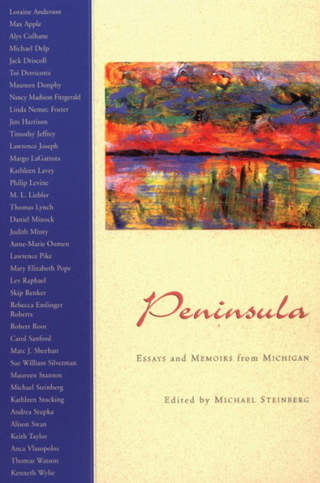 Peninsula: Essays and Memoirs from Michigan

Peninsula is a collection of thirty-seven personal essays and memoirs about Michigan. In that regard, it is a regional anthology--a multi-voiced, multi-faceted evocation of place--and yet, each piece stands apart as a personal recollection, sometimes funny, sometimes moving. What inevitably ties these essays together is the deep association the writers have with Michigan. Several, like Jim Harrison, Kathleen Stocking, and Thomas Lynch, live there; others, like Max Apple, Toi Derricotte, and Philip Levine, were born there and left; and some like Jack Driscoll, Linda Nemec Foster, Michael Steinberg and Lev Raphael, moved to Michigan from other places. Clearly though, each contributor has a strong connection to the geography and landscape of the region. The selections are wide-ranging and diverse. There are pieces that look out on nature and the outdoors, evoking images of Leelanau County and the Upper Peninsula; there are essays and memoirs about Detroit, Grand Rapids, and Lansing; there are expatriate pieces, and essays/memoirs that mine memory and imagination. Peninsula gives readers a sense of the variety, flavor, and distinctiveness of Michigan's character as well as exploring the varying styles and personal histories of each contributing writer.


Reading in Freeport, Maine during the winter residency of the Stonecoast MFA program in January, 2009.
The podcast sponsored by Maine Humanities Council
Stonecoast Reading.

"'In the Preface, Robert Root writes, 'The reader will find many rewards to traveling these peninsulas'. Indeed he is right.

The 'peninsulas' Root refers to, however, are not Michigan, but rather the writers' worlds, their stories, observations, and glimpses into the unique lives." Crab Orchard Review

“Steinberg, one of today’s major advocates of creative nonfiction, has not only strung together an anthology dedicated to place, but also presents the wide range of this genre. Within the pages of Peninsula, one will find the personal essay, the travel essay, the memoir, the nature essay, literary reportage, lyrical medications, and even a poem by Philip Levine, which, by its inclusion in this anthology, asks questions about the boundaries of this difficult-t0-define genre.” - Ira Sukrungruang, author of Talk Thai: A Memoir of an immigrant Son